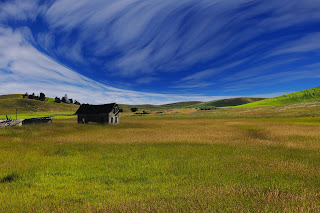 Winding way away
Beyond the eastern boundary of our not-so-big burg
Behind the back of the back of my backyard
On a gaunt twoway tract of Texas tamed by blacktop over bridges and byways
Under cornflower skies clouded with cotton, so wide they reach beyond the corners of the mind’s eyes to the afternoons of childhoods past where they filter through lenses of reminiscence amplifying the azure to a sharpness that pierces the heart with want for all of the promise once promised
Impaled by that point, bleeding bygones over bridges past bales and barns where cattle and cactus and cottonwoods cross paths with cemeteries and new construction and antiquity scantily secured by the rusting rails of what remains
With wounds inflicted by wishing, but not necessarily needing, nursed for no reason other than the harassment of hindsight all of the way to an apparent nowhere
Out past the prior passages ventured to for a view of anything other than the day to day of pandemic perimeters imposed by our present predicament
Finally, filling my lungs with a refreshing that afforded the opportunity to turn back to where I belonged
Wayfaring a backtracked route through that wild tangle of what once was and now is and one day soon shall be, lined up all along the asphalt that divided its direction with nothing more than a thinly dotted line that can be crossed over, so easily sending one off in the wrong direction
Beyond the eastern boundary of our our not-so-big burg
Behind the back of the back of my backyard
Posted by Laura Becker at 12:11:00 PM No comments:

She Just Works with Kids 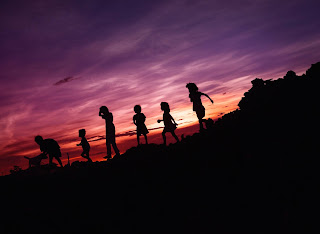 She doesn’t do real ministry…

She can’t be on the speaking schedule…

She wouldn’t have any insight…

She couldn’t teach that class…

She wouldn’t be tough enough…

She wouldn’t know how to do the research…

She’s not a real pastor…

She’s not actually in leadership…

She doesn’t need to be included…

She doesn’t need a day off…

She couldn’t handle the complexities…

She really sold herself short…

She has had all of the above said about her without a second thought because...

She "just" works with kids.

I was baptized on April Fool’s Day.

In second grade, after accidentally eating little smokies during lent, a boy in my class told me that they were going to have to take me to church and pray the weenies out of me. I was horrified. But my mother later assured me, much to her amusement, that there was no Roman Catholic ritual for the exorcism of miniature kielbasa.

At my confirmation, my dress blew up over my head in front of the cathedral.

And while giving my high school baccalaureate speech, to my amazement and delight, I was not struck by lightning.

I’d anticipated in my adolescent brain that this just might be a possibility, as it was the first time I ever intentionally used honesty and humor to share with others about faith in a public forum. It was then that I began to truly believe that God just might have a sense of humor after all. Something I now see was being clearly conveyed to me all along. First off, I was created female (Ha!), in a Roman Catholic household (Ha!), with a gift and calling for ministry (Ha! Ha! Ha! HILARIOUS!) So, as I headed off to college, I couldn’t help but think that somehow, the joke was on me.

My first weekend away, I went to church…and then didn’t return. For weeks. Then months. Then finally years. I want to be clear, this was an absolute surprise to me because I wasn’t raised a “casual Catholic.” I completed my Confraternity of Christian Doctrine with almost perfect attendance. My entire growing up I only missed church twice. EVER. Once when I was having an appendectomy and the other when I went to New York with my choir…but went on a weekday to make up for it.

But as a young adult, I loathed it. It really grated on me. Not because I didn’t believe in God, or want God in my life, or even love God, but because the talents and calling I had been gifted with and the beliefs I had brewing, just didn’t reconcile with the rest of it. That little mustard seed of grit I was granted was not gone, it just needed to be planted elsewhere. But I had no idea where to begin. So, I started with the Catechism of the Catholic Church and I went through it a page a day because leaving something so central to how I was raised was a big deal. And it took a long time. But before I was even finished, I could see it wasn’t who I was meant to be. So, who was I?

Well, after a lot of deliberate research, study, and discernment turns out I am a Presbyterian, who recommitted to Christ and officially joined the church when I was 30, with a wicked sense of humor who loves storytelling and still hasn’t forgotten what it was like to be that little girl from way back when. But who is able to laugh about it. And write about it. And talk about it. And be absolutely okay with others laughing along and seeing themselves somewhere inside. Someone who’s taking it just a page turn at a time like with that hefty catechism, slowly discerning what to do next and always waiting for that wonderful punchline that I now know is never at my expense.