No, All Of That Scrimping Will Not "Save" You 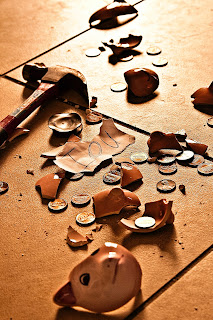 I keep running across articles about smart ways to save despite inflation. That’s fine.

But, no, these will not truly “save” you.

I was born in 1973. The year everything “broke.” There are too many to list but here are a few highlights…

And…THE GREAT INFLATION which technically began in December 1972, but would kick into high gear in January 1973 and carry through the rest of the decade into the 80’s.

It was with me from the very beginning and throughout my growing up. And it has clung to my bones. Seeping into the marrow of my being. Brought on by the boxing up of our belongings and move out of state to:

Charles City, Iowa - for 2 months…where we lived in a motel.

Until my father had finally reached his limit with the relocations by this finance company he worked for, brought on by all of the defaults…

One night at the A&W drive-in, just trying to have dinner without a kitchen, in temporary digs, after his third relocation in 16 months, where each of the previous had promised to be his last; his toddler daughter running up and down the back seat and his newborn son wailing away, with root beer and French fries everywhere and the possibility of yet another relocation on the horizon…

There was one last spill and with a “Son of a bitch!” the window tray slammed to the pavement just before his squealing tires tore out of there back to the motel, heaving the bags into the back and hightailing it back “home” to take a new, more stable job, with an oil company.

A solid industry. Much more reliable than finance. A sensible decision.

But…this oil company, Skelly, was somehow rolled into another. Who relocated us just 2.5 years after moving “home” when I was in kindergarten.

This time, the move was to Kansas. Where, over the next 7 short years…

-       Skelly was finally fully merged into the Getty Oil Company.

-       The Getty family fought over the entire company to the blows.

-       Was approved for purchase by Pennzoil

My dad was suddenly out of that “stable” job and found himself loading barrels on a dock for minimum wage. I was in junior high, throwing newspapers and babysitting like crazy. Mom was caring for other people’s kids in our home, baking, sewing, and whatever else came along. And they owned two rental houses that now, with the economic downturn from all of this crap taking its toll on the community, sometimes covered their costs…that my parents couldn’t get rid of because there was no one left to buy them.

The job finally opened that he had been promised if he would hold on and load barrels, but not the way he was originally promised. It would still be his…if we relocated. So we packed up, with 3 unsellable houses listed in Kansas, and moved. Again. To where the work was. Not “home.” But Iowa.

And the houses FINALLY sold. In my Freshman, Sophomore, and Junior years. At a loss.

And it has all stuck with me. All of it.

But I don’t see anything in articles on “smart ways to save” that would have made a difference.

Bargaining for an extra $50 off of a mortgage a month doesn’t stop downsizing.

The common thread of everything above and the most base element it all boils down to? GREED.

Greed is not good. It makes a great soundbite, but greed has consequences. Human consequences. And there are not enough coupons you can clip to combat it. It’s all a mirage. How do I know?

Because those consequences rarely land on the greedy themselves, who will gouge and grab and boast of bootstraps…and then demand a bailout. I have never once seen any of them whip out a burgeoning booklet of spit slathered S&H Green Stamps to cover their losses, even in those decades these self-proclaimed smart savers have been lauded to have “survived.”

I do not have all of the answers, but these are not them. And just like these people, I was there. Through all of it. And it’s still with me. Forever.