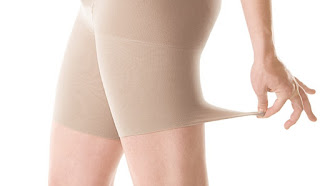 Lies have been the demise of many a relationship. However they are the firm foundation of one very near and dear to my derriere. And I’m not talking about those little white ones either. These are more full coverage and also come in beige, black, or cocoa…shapewear.

Spanx aren’t exactly lying, they’re just…well…smoothing things over and enhancing the truth. Okay. Okay. Fine. They’re a bald face lie. Smoke and mirrors, up my skirt, where I typically don’t allow smoke and mirrors, but recently invited the TSA.

You see, seeking to be comfortable for the long journey ahead, I chose to forgo a waistband and wear a simple cotton dress for my return trip. I also decided, at the last minute, to throw on a pair of offbrand, shall we say, flesh colored biker shorts below the flouncy folds of fabric. You see, although the dress was loose fitting, should I find myself unexpectedly exposed by a quick gust while entering or exiting the plane, I wanted to cover my assets. I also knew that I would be flying through Minneapolis, which is a very large airport and I wanted to be able to stretch my legs without rubbing them together.

However, after entering and exiting the super-sonic-see-through scanner, twice, there was something alarming about my attire. The floral cotton fiber of my dress kept flopping over on itself and it was suddenly necessary for security to lift the front of my frock. Thus exposing the fabrication under the fabric.

And as I stood there in that moment wondering why it felt far more revealing to share a sliver of spandex stretched across my thigh than a full-on peep at my purple panties, the truth hit me:
I’m showing far less, but revealing so much more! Panties are a naughty little secret. Shapewear is a despicable deceit.

Security was exposing my insecurities. And I suddenly understood the real reason Superman has his Fortress of Solitude and Peter Parker his privacy. It’s because even though they emerge the embodiment of truth, justice and the American way, they don’t want their stretchable subterfuge shown either!

That’s why we don’t see Bruce Wayne shaking his stuff, shimmying his booty into the Batsuit struggling to stretch the crotch higher than his knees. Or on his back on the floor of the Batcave sucking it in as he tugs it on up over his tush. Or a sliver of a Supersuit showing through the ass of some pants or up a kilt at a TSA security checkpoint. Because bulletproof or not, it’s still bumping up that booty and that’s really nobody’s business!

And although mine was not a supersuit, and I didn’t always wear it, my shapewear was part of a secret identity. What “lies” beneath and girds my literal loins along with mental ones. Secret support, that was suddenly no longer secret. And so, rather than asking to step aside, I just lifted the skirt a bit further, exposed the front of my thigh and got on with it. They had already been unveiled. There was no point in pretending that we hadn’t seen them. I refused to be shamed as if I had done something wrong by being a woman and wearing them.

These were my Lycra locked legs and if anybody didn’t like them, they could kiss my spandex smoothed backside!

And as I lowered my skirt and gathered my dignity along with my carryon, I suddenly felt lighter. So I had on a little help? Big deal! We can all use a little extra support from time to time, the only difference, now everybody knows it. Because the truth shall set you free. And you’ll be really free, just as soon as you make it home and peel off that under armor!