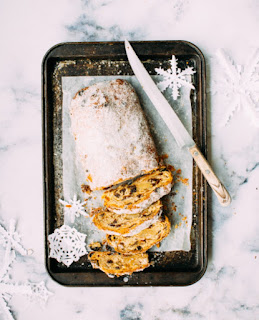 The tree was dead. Completely dead. Brown, crispy, surrounded-by-a-circle-of-needles-half-naked dead. And under it was a bread maker, that he swears to this day had no ulterior motive.

Three weeks earlier, we had lugged the booty from a bridal shower in the backroom of Breadeaux up the steps to our new apartment, having just signed the lease on the second story space above the weekly newspaper where my fiancé had recently been named editor. It was $250 per month and had one leg of the city’s water tower sprouting from its roof, but it was going to be ours, together. He had moved in two days before and after the altar, I was going to migrate the 90 miles south to join him.

His mother had very thoughtfully planned a small shower for me, but then had to change venues when word got out in the tiny town. I knew something was amiss when she mentioned I should go select more stuff because my very rational and reasonable registry had already been run through. Hmmm.

So, my soon to be spouse had dutifully driven me around to every venue in the vicinity to choose and checklist affordable I-don't-really-know-you-but-I'm-dying-to-see-who-he's-marrying-while-still-being-very-thoughtful-and-generous-about-it suggestions for our newly extended registry. Economical essentials like tea towels and toothbrushes. And then...

For some reason, that still escapes me to this day, I don't know why I did it, but I did. I threw in a bread maker.

In the winter of 1994, bread makers were the new novelty marketed to the masses, especially...brides. Which means they came close to the cost of our entire rent and were the fantastical, fantasy fad people threw on their registries, but rarely received. Especially, people like us. People who had completely forgone registering for China because the pricey porcelain patterns were far too impractical. People who were grateful for every last gift they had already gotten. People who felt gigantic guilt at the thought of going out to get more.

But nevertheless, the bread maker made the list. Just to prove it could. Just because I'd never actually get one. Just because anyone who knew anything about me, anything at all, could plainly see that I wasn’t very domestic and wouldn't dare.

But mostly because that bread maker made this bride mad. It was somehow taunting me. With everything I wasn't and couldn't have. So, right on the registry it went.

And on the day of the shower, to my shock, I got every item I had registered for but the bread maker. From the 89 women, most of whom I had never met, who had come that afternoon to catch a glimpse of the girl who would be moving to Wayne county after the wedding. My mother-in-law hadn’t even sent that many invitations. Many of them had just shown up gifts, potluck, and plated cream cheese mints in hand.

And as we hoisted our haul into our new home, there was one more gift…from him. A Christmas tree, set up and ready to decorate with the lights and ornaments he already knew we were going to be gifted.  My husband had a way of making the most minimal gift magical with just a few romantic words. It was his habit and he had done this from the very beginning with everything from journals, to love letters, to three simple carnations because they were all he could afford. His gifts were the best because each one had meaning and said something about us.

And this was no exception. So, we decorated and delighted and dreamed of sharing our first Christmas morning under that tree as a married couple only three weeks later.

But now…the honeymoon was over.

I sat under a tree that had died while we were away, staring down at a bread maker in a box where my romantic gesture should have been wondering what exactly he was trying to tell me about “us.”

And that was it. No card. No note. No cute little words or romantic ideals. A bread maker. You know, for all of the bread he expected me to bake him…now that I was his wife.

Fear struck me right in my shellfish little soul. What had I done to deserve this? Or rather what kind of man had I married that would buy me a bread maker?

And the cost! We didn’t have this kind of money! Here we were only eight days into our marriage, breaking the bank on bread makers! What kind of spendthrift was he?

My God, what kind of life was this going to be? What was I thinking? Was I thinking? Obviously not! He didn't know me at all! And really I didn't know him either! When it all boiled down, we were little more than strangers...BOUND FOR LIFE! I was now bound to a bread maker buyer for the rest of my life!

Maybe I had missed something. Surely that was it. I looked up into his expectant face and…

He was happy about this. Proud of it. And obviously expected me to be too.

“Thank you.” I said as I sat and stewed in my nightmare visions of future giftings of crockpots and blenders as I thanked him in my apron and pearls just before vacuuming up the debris with my brand new Hoover.

But Christmas as a married woman was well underway and we had places to be. So I tucked the bread maker back under the brown tree and thanked him again as we headed out to house hop and spend Christmas with family.

“Wow! That was nice.” And I knew that she knew. My mother-in-law is not one of those naggy or nosey ones. She’s actually quite nice. So, if she already knew, there was something I didn't.

It turns out, that when my husband saw that bread maker on the registry, he got quite a jolt. Not only because it was completely out of our reach, but because he couldn't possibly imagine me as a bread maker. But if I wanted it, somehow, he would make it so!

There had been 50. 50 that would be available for $50 over 60 miles away. And he had solicited her help in preplanning and plotting to procure one through the hellacious  herds of Black Friday humanity. And even though $50 was still a stretch, there it miraculously sat, under my dead tree on Christmas morning. Because this bride had requested it.

That silly bread maker said so much more about “us” than any words or whimsy ever could. And I have learned over the years to be very selective when soliciting what I might like to have. Because he will remember it and do everything in his power to make it so. No matter how odd or out of character or out of the way, there it will be.

Because it has been my husband’s habit and he has done it from the very beginning. He has a way of making the most “minimal” gift magical.
Posted by Laura Becker at 5:04:00 PM