I Don't Want Anyone To Die For Me, I Just Want A Barbie 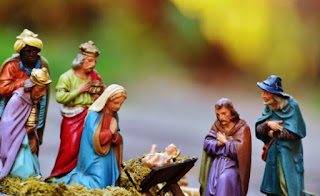 The moment my Dad lined the three of us up along the lip of our harvest gold and walnut couch, I knew it was a trap. I may have been seven years old, but I was savvy enough to see through “Do you know what Christmas is really about?”

“Jesus!” I proudly parroted, certain I had just saved myself and siblings from the ensuing spiel. And then he turned to my six-year-old brother.

“Do you know what Christmas is really about?”

Come on! Come on! You can do it! It’s a trick question. You just heard me say the answer.

But then he turned to the toddler.

I caved into the cushions as he launched into a lengthy lecture, one with too much information for my age and stage, that completely crushed that cute little Christ in a crèche and left me a very sinister second grader who had savagely slain someone with her sin.

When it was over, my brother and sister happily hurried off blissfully oblivious to their offense after becoming completely lost immediately after the opening bit about the babe in Bethlehem. However, the gravity of my guilt settled on my shoulders as I made my way over to the console TV where my mother had placed our nativity set, as she had done every year, ensuring we all would see it.

I surveyed the ceramics from Sears. There were the wise men still way off in the corner of the console working their way west for the Epiphany. The shepherd who carried his sheep for some reason rather than letting it walk. The ox and ass, who through stifled giggles allowed me to say “ass” at church. The angel with a clipped wing that had chipped when she slipped from her nail and crashed where the cradle should have been. And Mary and Joseph, all staring expectantly into the blank space where my youngest sibling would reach her chubby little fingers in on Christmas morning, to place the baby, ceremoniously signaling the start of our festivities.

All awaiting the arrival of Jesus, just so I could kill him.

It was a good thing I had been preparing to make my first confession in a couple of months. We had really only covered the venial sins in my Baltimore Catechism. You know, the little ones, like fighting with my brother and not making my bed. The stuff that would still let me into purgatory where I could be on a payment plan of penance. Nothing so dire it deserved damnation. But it turned out we should have been covering the mortal ones, because I was unwittingly a murderer!

Mrs. Johnson, my Wednesday night CCD teacher, had mentioned the mortal sins as a category not to concern our elementary school selves with because those were really big ones like killing someone…which I had apparently already done! And the only way to get a mortal sin off of your soul was to go to confession. So, I would have to sit and stew in my sinfulness until that Saturday in spring when I would finally be capable of confessing to this capital crime and cleanse it from my conscience. I was going to have to be extra careful not to take any unnecessary risks to ensure I survived until then!

Over the next several days, at recess, I stayed off of the ice my friends were so gleefully gliding across and sat on the steps. I skipped going to my best friend’s house after school. And every time we got in the car, I secured my seatbelt, even though this was 1980 and seatbelts were completely unnecessary unless we were on vacation and even then, I am pretty sure they were only required to keep us from climbing all over the car and driving my parents crazy on cross-country car trips.

I didn’t go out and play in the first snow of the season. I skipped sledding and stayed safely inside watching the neighbor kids out the dining room window. And this is when my mother was sure something was amiss.

“I know that Santa is watching, but it doesn’t mean he doesn’t want you to have any fun.” And then she winked.

Mom was well aware I knew who was what. I had known since Kindergarten. It started with suspicions about The Tooth Fairy, then barreled through the Easter Bunny and snowballed right on over to Santa. I had always been an over-thinker and in a matter of minutes my five-year-old mind had managed to decimate the magic, much to my mother’s dismay.

However, it wasn’t “Santa” that concerned me. It was that other guy in red. The one whose name also started with an “S.”

And as my worries piled up just like the snow outside, I finally could take it no longer.

“I don’t want anyone to die for me, I just want a Barbie.”

And then there were tears.

And a very simple response.

I don’t remember exactly what she said, only that she pointed out how very much she loved me. And if she could love me that much, to just think how much more God must love me and that Christmas and all the rest of it, in its simplest terms was about that love. And yes, there was a birth and a death, but there was a lot of living in between…and after. And so much living and loving for all of us to do as well.

And most importantly, she assured me that I was not a murderer and that dying for someone was something else entirely. And she let me in on a little secret…the best news of all.

I was getting a Barbie.