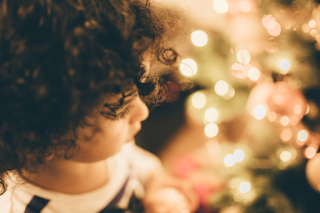 Running in circles and hurling their halos, the preschoolers pressed on through their presentation. This was their first time performing what we had rehearsed, on the actual stage. A situation my inner voice of experience from so many years of working with small children had warned me against…but I ignored. Because I had planned. Because we had practiced. But mostly because before we even began, I had known and accepted, it would be imperfect.

The previous year, one bare bottom made its debut as a pair of tights suddenly slipped down a backside after intense shaking led to their shucking. I could feel the crimson creep as I snuck up to the stage and secured the spandex once more before they bashed on. The annual reddening of the face is a tradition for those of us who have spent extensive time with your tots. I highly recommend it. And it can be counted on to happen at least once during the holiday season. Why, you ask?

Because children scratch themselves through Jingle Bells.

Songs are sung far softer or louder or more off key than they have ever been.

There is a spontaneous solo about Batman’s odor and Robin’s miraculous ability to lay an egg.

A child loses her first tooth in the middle of a medley and starts screaming, “I’m bleeding!”

All but two of them hold the hand-painted signs for The Twelve Days of Christmas completely upside down.

“Now bring us some frigging pudding!” is shrieked as a demand. Not sung as a fruitful request.

The Christmas tree falls over.

They have to go to the bathroom right before their entrances while wearing the world’s most complicated costumes, even though they just went. And once one has to go…they all have to go.

Cameras on tripods from times gone by get caught up in capes and come crashing down.

Angels pick their noses and hurl their halos and bat their neighbors with wayward wings.

Shepherds shove crooks down their costumes emerging with Captain Hook hands or completely disrobe because “olden clothes are itchy.”

Sheep get scared and run off and not a single shepherd goes after them.

We are informed at full volume that “P!U! Frankincense stinks!!!”

One king is feeling generous and passes out all of his gold before making it to the manger.

And when you try to correct this with costumes in the coming years, Myrrh decides he has had enough and makes an exit.

Someone refers to the donkey as an ass and all manner of giggling ensues.

Mary and Joseph get into a marital spat and will have none of an angel’s immediate attempts at mediation.

Everything is an adventure and a distraction and demands to be enjoyed in that very moment.

And Mommies and Daddies are helloed to, no matter how inconvenient or inappropriate because the children spy or at least suspect that they are out there and call to them seeking reassurance.

And the children are loved in their imperfection.

Which is exactly the point. Of it all. The very essence of Christmas itself.

And with crimson faces we are reminded of this, by the children who in that moment are teaching us, rather than the other way around.

Because the annual reddening of the face is a tradition for those of us who have spent extensive time with your tots. One that I highly recommend.
Posted by Laura Becker at 5:45:00 PM