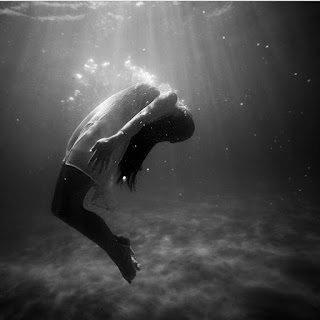 Sometimes, there are those that succumb to this something we just can’t put a finger on, even though we’ve seen subtle signs of its chronic companionship for so long. Unable to speak its name either out of ignorance or avoidance or undulating uncertainty. Until one night we bolt, wide-eyed and woke. Finally, fully aware of what was witnessed and ultimately, all it adds up to be. Sadly, suddenly sure, that there is nothing we can say or secure or summon in ourselves to save them from this self-imposed swell.

So we watch as those we love slide into a series of unstable relationships where they choose to be devalued and dominated, but don’t dare depart, because they know, on their own, they are unable to keep it together. Because this something surges suddenly and severely, sucking away their serenity and sense of self-centering.

For this, they cohere to these calamities with cult-like commitment. Taking on traits and truths of their treasured tyrants. Trying to maintain what might be lost, with one last lunge at loyalty, if only for a moment.

Drinking and smoking...medicinally...alone, in those wee hours where hypergraphia takes hold, strangling and stifling the voice, forcing forward words which do not pair well with what previously so prominently marked their manner. And yet, we’ve garnered glimpses of these symptoms consistently, whether willing to admit it or not. Not knowing quite what to make of them.

But now this new something stampedes forth, flowing from the fingertips in a run-on race, speeding on without edits or second thoughts as to what the consequences of actually publishing might mean.

An all-in on entirely too much every time. Arguments, thoughts, ideals and intimacies. Intimacies confused and conflated with intellectual encounters to better their beginnings begun in bedrooms as one-night noncommittals brought on by imbalanced behaviors and bad judgment that now must take root as relationships rather than retreating to the realm of repeated rebounds they would rightfully be relegated to if only reexamined against the risky route life regularly runs.

Putting it all on people too soon precious and passionately proclaimed partners, if not for life, at least for now because they manage the mania and malaise that cannot be maintained alone. So power and viewpoints and mind remaking are relinquished into their domineering hands in exchange for intense direction, leading to sharp, sudden pivots on platforms and politics and personal preferences, perceived by those with long shared histories as we take pause and pose the question, “What exactly is going on here?!?”

An answer which we likely already know but until recently were just unable to pinpoint...or face.

As we watch the wayward veer from their core course previously set by an inner compass that pointed toward the harbor of a heart that held hope and humanity.

Watching the bobbing above and below the surface of the undiagnosed as they defiantly look directly into our eyes before again, deliberately diving out of sight, sequestered and reclusive, slurping their survival from the false security of a bubble about to burst. Taking up residence with whatever awaits in the abyss...so appealing, it apparently calls to that core, corrupting the compass with a magnetic north nowhere near up.

Seeing them occasionally surface, sucking for air, defying their drowning. So we reach for them with firm hand attempting assistance that is swiftly accused of attack. Slapped and bitten before they disappear again to be snagged and sunken until whatever has grabbed hold this go-round releases. Hopefully, before the beauty of what we once knew them to be is completely waterlogged...washed away...never to be seen again.

And there they’ll lie, lifeless, battered on the beach, as we wait with watchful eye for just one more resurrection. But these repeated rescues and resuscitations by those currently closer than we, are wearing thin. And the attention grabbing just before deliberate drowning is drawing on deafness to this one particular vocal tone as we tend toward tuning it out, at last tiring of the the tidal to and fro. As those of us not blood relation feel that fondness draining fast from our hearts as we head up to healthier, higher ground escaping the again incoming surf with its relentless riptides, tempting us to be towed back into the tempest.

So we retreat, resigned to the reality of what is, knowing that it can be no different, despite our desires and well wishes for these wave-worn willful, until they see for themselves it’s time to come ashore. To actually set foot in the sand and see someone about this something that cycles like the tides with its highs and lows and loves and losses.

Because what can you do with someone drowning determinedly?
After repeated rescue, what of those who successively slink right back into the surf?
When are we willing to allow them their wish, slowly surrendering as they succumb to sea lost at the end of a far-too-long farewell?
Is it even our choice?