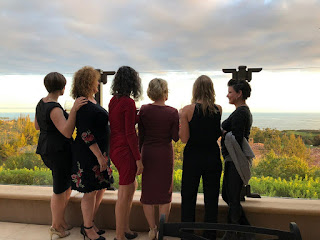 Howling!
Cackling!
Just below screaming!
Outright, unreserved laughter brought on by truths. The type that tend toward both the beautiful and bungled and in some cases bare-it-all ballsy, shared about ourselves. Those long untold tales that lie in our rearviews on not-so-straight roads to the women we’ve become.

Baring to one another the intimate uglies, so deeply furrowed by our far-gone failures, fears, and forefathers that despite their being done with, they have scarred below the surface. And although we are no longer internally bleeding from the battles and blunders gone by, they no longer fit the out-front façades and hard-fought foundations of our current lives. And yet, they are so permanently and profoundly a part of these people, that there is need to share them in the closest of confidences over cocktails and coffee tables. Narratives of juvenility no longer needed nor tolerated, held tenderly by those with whom we have the truest of trusts.

Women who span 11 years in age, but not in spirit. Who hear one another with open hearts and healing hugs. Who hold our stomachs after too much laughter, but never our tongues because the truth flows where it will. Wondering and wincing at the underlying similarities, although not complete sameness of the tales told. Finding funny in our failings as we identify ourselves in someone else’s story, when for so long we thought that maybe we were the only ones.

The much needed recharging with those further off on a daily basis than we may like, even when they are, on some occasions, just a few feet away. And yet, the absence breeds a fondness for friends like no other. And although we may speak sparingly, when we find the treasured time, the love we feel for these fearless few is never stingy. It is lavished with an abundance and attitude only dished to those dearest.

And as the weekend winds through arrivals and arrangements to dressups and dinners and returns and retreats into robes around the fireplace, just before heading off to bed, there is a late-night proposal and ponderment of slumber party parlor tricks from girlhoods gone by leading to ridiculous revelations that bring further sidesplitting screams before slipping into shortened sleep…because we have lasted into the wee witching hours attempting to suck every last bit of marrow from the bones we have picked from our petulant pasts that persist in providing all manner of entertainment before bagging up our booty and saying our goodbyes. Sending our hearts out with one another to wander this world in good company, until next time, when we will again toast to one another, in all that we were. All that we are. And all that we are yet to become. We women of the Not-Necessarily-Mothers Day weekends.