Grab 'Em By The Tassels! 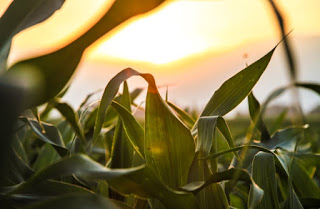 It was supposed to be a learning experience. And it was.

The summer of 1988, I joined a detasseling crew. Fieldwork in a cornfield. For $4 an hour. 65¢ more than minimum! And I was going to earn it! I had been warned up front that it was hard work. But my parents thought it would be a good experience. Besides, there’s nothing wrong with a little hard work.

I was 15 and I was going to have a hard time even finding a job, let alone anything that paid over minimum. They had already hired everyone over 16 who wanted to work and were now considering those who were at least 14 and could qualify for a work permit. My friend’s parents were on board too and so she and I were all set.

That summer was overly dry. As a result all of the corn was only about hip high. So it had to be walked on foot and done by hand. We had to bend down and pull the tassels of each and every plant in rows the length of the different fields they bussed us to, before they had the chance to cross-pollinate. Up and back. Up and back. As fast as our arms would move.

Upon entering the bus, we were told if the work was too hard to handle and we needed to quit, we could go sit on the bus and wait for the ride back to town. They didn’t tell that to the other 35 in the crew, just the 5 girls.

“They’ll never make it.” A hiss slithered up from the back in our direction.

And in that moment it became crystal clear that there would be no quitting. It wasn’t the same option for us it was for the rest. After all, there’s nothing wrong with a little hard work.

It was grueling, hot, back-aching work. But we hit it hard. And did it all. Everything we were asked. We never missed a day.

And we encountered snakes and rats. Not only in the corn, but on the crew too.

We were taunted by our coworkers.
Told we were weak and slow, although we did the same amount of work in the same time…so wouldn’t that make them weak and slow too?
Grabbed and groped “as jokes” because that’s just what all guys do. No it’s not.
Had our food stolen. Our drinks poured out.
Laughed at. Spit on. Told a bunch of vulgar crap.
“What? Are you gonna cry? Just quit already!” NO! You quit! I have as much right to this job as you do!

Every day, the crew got smaller. And smaller. Until by the end, there were 8 of us who stuck it out. The whole season. 2 guys and 6 girls. We gained a girl the 2nd week.

We did it. We stuck together and stuck it out. And we got our full pay. And…a bonus. That the 8 of us never saw coming. For all of the crap we put up with and pushed through that the owner found out about after firing a foreman and a couple crew members.

But when it came down to it…we were privileged. Not rich. Privileged.

Privileged because unlike others out there, our livelihoods didn’t depend on that job. Our sticking it out was a choice we had. And we made. Because we weren’t going to let them win.

But sometimes they do win. Anyway. And it sucks.

Privileged because I had the choice to not come back the next summer. To not take the foreman job I was offered. To take some time and look for something else to do with everything I had learned.

Because there’s nothing wrong with a little hard work. But there is something wrong. Very wrong with treating people as less than. Harassing them. Threatening them. Exploiting them. Or just looking the other way.

And if you don't agree, then maybe it's time you tried some "working class" work. It might be a learning experience.