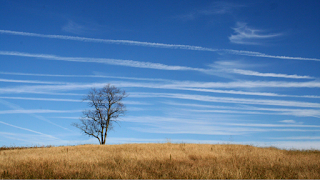 In Kindergarten, my family moved to Kansas.

There were higher paying jobs, better schools and more opportunities, for all of us.

Shortly after, my aunt and her family moved there too. And I have such wonderful memories of growing up with her kids in El Dorado, pronounced in the southern Kansas style..."L Door-Ray-Dough."

But times changed and so did politics, policies and prosperity. And it became evident they weren't ever changing back.

We moved. So did friends. And now finally, the last of our family.

My cousin and her kids are headed out. It no longer makes sense to stay. Her husband went ahead of them to take an out of state job.

It's no secret that Kansas is collapsing. And it breaks not only my heart, but in the long run the heartland itself.

Kansans are made of tough stuff. They are the descendants of the Dust Bowl determined. Of sod house settlers and Great Plains peoples. They come from ranch-hands and riggers and wranglers and reapers.

But now they are definitely reaping exactly what they've sown. All for the sake of a political experiment perpetrated by people curious "just to see what would happen if..." Seeds that have choked out not only the weeds, but everything else as well. Leaving the entire harvest something that no one can stomach.

Kansas is bleeding again. But this time internally. With an ulcer from everything she's swallowed. And now being force fed since she's become unresponsive. And the prognosis isn't good.