Another One Bites the Dusty 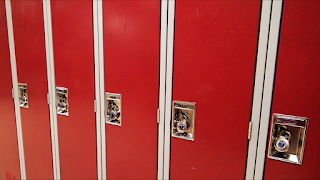 My first boyfriend and I lasted exactly five days.

I was in homeroom my second week of middle school when Jeff came up and asked if I would "go with" Dusty.

He was sweet and cute and even though he was really shy, had turned around once and said, “Here,” while passing me a mimeo when my row ran out.

Wow! A boyfriend! I had a boyfriend! None of my other friends had a boyfriend…that I knew of. I mean none of the old ones did. And the new ones I had only known a week and a day. That’s how long it had been since all five elementary schools converged together to start sixth grade. I barely knew their names, let alone if any of them had a boyfriend.

Tuesday, Wednesday, Thursday, all passed and Dusty looked at me a couple times, but never spoke to me again.

Finally, on Friday, Jeff came up and asked if I was going to the football game that night.

Then he ran to another locker, whispered to a boy I didn't recognize AT ALL and came back.

"Dusty wants to know if you'll hold his hand."

WRONG DUSTY! There was more than one? What were the odds?

I didn't want to hurt his feelings so I said, "I'll think about it."

Then right after reading class, I sent my new friend Denise to tell Tara to tell Dusty that we had to break up. “Because things were getting too serious.”