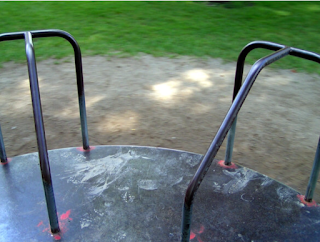 I was 10 years old the first time I heard the name, "Geraldine Ferraro."

It was in a joke, I now can't remember, somehow swapped for the word "Ferrari” on the merry-go-round at Washington Elementary School. I found myself reeling as I whirled in circles soaking up the scoop on this sinister succubus who would one day dare to oppose our republic’s rightful redeemer, Ronald Reagan. I was thirty miles outside of Wichita, but a world away from the “elitist East Coast” as I gained my informal education on the playground in my proudly conservative precinct in Southern Kansas.

My stomach lurched from a mixture of motion sickness and admonition as I gobbled up all I was being fed about this monster in our midst. This "pope lovin' man hater" who wanted to force me to pee in the men's room standing up, stop all little boys from being born, draft only the girls to go fight a nuclear war in Russia and turn everyone Catholic! Aside from the fact that I was already Catholic, a rarity for my region, I was terrified by the rest.

But how did they know this? Were they sure? How could this possibly be true? They “saw it on T.V.” And that was that. The preeminent principle of the playground. If some kid said they saw it was on T.V., then it was so.

Ms. Ferraro was reported to have said something about women’s rights, which I was informed, was code for that ERA thingy. I had no idea what the E, the R, and the A stood for, and neither did they, but I was notified that it was definitely illegal. There was a vote and everything. And even though this Geraldine didn’t exactly say all of that other stuff directly, everyone knew that that’s what ERA really meant. Plus, this kid’s Dad said she was Catholic, and everyone knew Catholic’s couldn’t be trusted.

Hmmm. I suspected that last part was more about me than Ms. Ferraro because in the second grade, after I forgot and accidentally ate the little smokies that came with my macaroni and cheese during Lent, I was told in front of everyone that they were going to have to take me to church so the priest could pray the wienies out of me! I went home and cried until my mother reassured me there was no Roman Catholic ritual for exorcising miniature kielbasa.

One of the first lessons learned in any schoolyard is that misinformation is key. If you can’t beat ‘em, spread rumors or at least suspicion. And when all else fails, throw dirt.

But regardless of any ill intent on his part, it was clear the end was near. We had to prepare for the apocalypse...whatever that was. But we didn’t have time because the recess bell rang, foiling the fifth graders from formulating a plan to save our future. But I assured myself it would all be okay. It wasn’t like she was trying to be president or anything. And anyhow, she was a woman, so like that could ever happen?

And then, it was upon us…sixth grade. 1984. I started middle school in the fall of an election year. You can imagine my horror at returning from my clueless summer sloth to discover for the first time, the Democrats had in fact, selected a woman as their potential V.P. A woman! And not just any woman…that woman!

All summer I had spent my days in clueless abandon, frittering away the last of my childhood, while Mondale and his minion had been mounting their campaign! How could this happen? I have to admit, I hadn’t really learned any more about her, but I hadn’t unlearned what I thought I already knew either. And I was pretty sure I knew plenty. Enough to be certain she was “no match for our morals.” Not that I in my middle school mind had any idea what exactly those might be, but I had heard a grownup say it. So, it must be so.

In the end, the incumbent won. Mondale/Ferraro carried only Minnesota with its 13 electoral college votes. And we as a nation we got exactly what we asked for.

And Geraldine Ferraro, the joke from the playground, never won an election again. She became a passing icon I knew in name only, as I shoved her to the back of my mind...where she stayed for nearly three decades.

And then, upon her death, information passed before my now-adult eyes. Showing me I actually knew next to nothing about this woman, who despite all of the opposition, managed to make history. I made a choice to learn more about her, without any pretense.

And what I found, in the most concise terms…she was pretty badass! No wonder they feared her. Change can be scary. Especially when it's so far ahead of its time.

But I was no longer afraid. I was grateful. Grateful for what she did for little girls like me. And grateful for her willingness to endure the sticks and stones thrown at her from much loftier perches than that silly little playground.