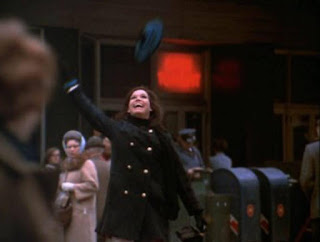 Every Saturday evening as I headed off to bed, Mary Richards headed off to work. But not before reminding me, "You're gonna make it after all."

You see, even though The Mary Tyler Moore Show was for grownups, about grownups, doing and saying grownup things…those few moments right before the first commercial break, were a glimpse into the wide world that awaited me…a young girl growing up in the 1970’s. I would bask in the glow of the color console in the corner as she strutted through those opening credits with confidence.

And I would watch with worry and wonder as they drew to a close and she tossed that blue knit hat high into the air. Flinging it from her fingertips just before it froze near the top of the frame. And there it would stay as the rest of the credits splashed across the screen right before the fade.

But what happened after?

When she threw that hat, did she get it back? Did it land in the snowy slop? Come back to her like a boomerang?

How could she just do that? It was a nice hat. I would have liked to have had that hat. And she just chucked it up in the air with no idea where it would go. No guarantees.

What if someone stepped on it? Or tried to steal it? Or it got stuck in a tree?

I mean it’s not like she just gave it a little toss. She really let it rip.

And she was so happy about it. Doing something so risky. Something you’re just not supposed to do.

And what did those people around her think? This lady ripping off her hat in the middle of Minnesota winter and letting it fly! Did she hit anybody with it? Did they hit her with it after?

These were huge concerns! And week after week I would watch and wonder. Because, somewhere deep inside…I wanted to do it myself!

Why did she throw that hat, I wondered?

Because she was okay with the consequences, whatever they might be.

And so today, that’s what I’m reminded to do myself!

To take something beautiful and precious to me, and launch it out into the world. With no idea where it will land or how it will be received. Not because I don’t care. But because I’m okay with the consequences.

That blue hat, frozen in mid-air is a good reminder...

“You’re gonna make it after all.”